National Film Board photographers setting up by an iceberg (e011175885)

The shape and size of icebergs depends on their breakage and melt patterns, as well as waves, temperature, and the ice pack around them. Common shapes include tabular, blocky, wedge, pinnacle, domed, and drydock.

Tabular, or flat pieces of shelf ice that break off to form ice islands, are stable enough to use as mobile research platforms, while the more irregular shapes can break apart without warning. According to the Iceberg Finder, the largest iceberg ever recorded in the Arctic was recorded in 1882 near Baffin Island 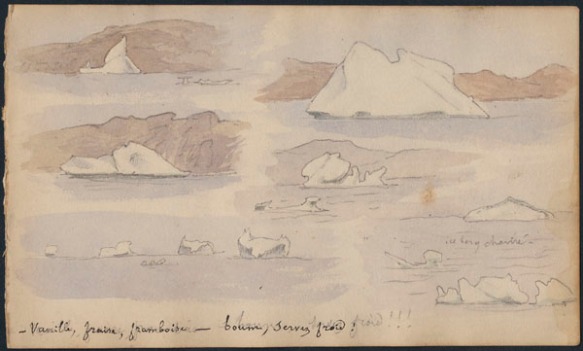 Judith-Pauline White (née Hunter) was an Inuk woman born in 1905 in Hebron, Newfoundland (now Newfoundland and Labrador), about 200 kilometres north of Nain in Labrador. She married a well-known trading post owner, Richard White, in 1922 and became stepmother to his daughter; the couple would have five children together. The Richard (Dick) White Trading Post (now a heritage building) is located in Kauk, approximately 4 kilometres south of Nain and 34 kilometres north of Voisey’s Bay. Ms. White, an amateur photographer, took photos in the area starting in the 1920s. In the 1950s, she met anthropologist Alika Podolinsky Webber, who travelled to Labrador to conduct research for her thesis about the art of the Mushuau Innu (of the Innu Nation). Podolinsky Webber went to Kauk because she was aware that the trading post was a hub for Innu and Inuit along the north coast of Labrador. Ms. White sent a shipment of material to Podolinsky Webber after Mr. White died in 1960. The material included photographs and negatives for over 200 images of daily life in and around the trading post. White’s photographs (see lower levels) feature both Innu and Inuit, and are a visual documentary of life in Labrador from the 1920s to the 1950s. This wealth of knowledge, which was tucked away for decades before being donated to Library and Archives Canada in 2007, is now accessible to everyone.

As an Inuk woman from Nunatsiavut, an artist and a former curator, I am interested in the life and work of this early photographer. I cannot help but think of the well-known Inuk photographer Peter Pitseolak from Cape Dorset. His snapshots of Inuit life in the 1940s and 1950s are some of the earliest examples of Inuit individuals turning the camera on their own communities, rather than being the topic of ethnographic study by others. Unbeknownst to Pitseolak and those who followed his work, an Inuk woman in Nunatsiavut was also taking photos of everyday life. Why have we not heard of her? As Inuk scholar Dr. Heather Igloliorte writes in the Fall/Winter 2015 issue of the Inuit Art Quarterly, the Indian Act excluded Inuit in Nunatsiavut when Newfoundland joined Confederation in 1949:

Labrador Inuit artists were unfortunately omitted from virtually all of the developments that emerged from the concerted efforts of [James Houston (who “discovered” modern Inuit art)], the government, the Canadian Guild of Crafts, the Hudson’s Bay Company, and others, because the federal government did not officially recognize that there were Inuit in Labrador until decades later. We did not establish studios, form co-operatives, build relationships with the southern Canadian art world, and develop national or international markets for our work. We were not even permitted to use the ubiquitous “Igloo Tag” for authentification until 1991.

When Newfoundland joined Confederation, White was still taking photographs, but galleries and exhibitions at the time did not feature Nunatsiavut Inuit artists. Instead, these artists sold their works door to door, at local craft shops or to the occasional visitor. We can only imagine how the Inuit art world would have reacted to White’s work had the contemporary provincial or federal governments given support and recognition to Nunatsiavut Inuit artists. We are thankful to the Alika Podolinsky Webber estate for its valuable gift. It is a visual reminder of Judith-Pauline White’s passion for photography and her recording of Labrador Innu and Inuit culture, which is now available online for all to enjoy.

Heather Campbell is an archivist in the Public Services Branch at Library and Archives Canada.