These works reveal what may be an unsuspected artistic side to our prime ministers. They also show how the role and the personality of some prime ministers have—leaving politics aside—inspired a number of artists. Yousuf Karsh, for instance, whose photographs are preserved by LAC, made portraits of prime ministers of many generations and political stripes during his career, including William Lyon Mackenzie King, Robert Borden, Pierre Elliott Trudeau and Joe Clark.

You may have seen the famous photograph of Pierre Elliott Trudeau sliding down a bannister like a child! Taken during the Liberal Party of Canada leadership convention in 1968, this photo is one of the most remarkable shots in the career of news photographer Ted Grant. In a book by Thelma Fayle about Grant’s life work, the photographer explains that if he had not heard the laughter of people nearby, he would probably have missed the moment entirely: “The laughter triggered me to turn around and catch three shots before Trudeau was almost on top of me” (Thelma Fayle, Ted Grant: Sixty Years of Legendary Photojournalism, Victoria, Heritage House Publishing, 2013, p. 67-68).

Born in Toronto in 1929, Ted Grant became a photographer in the mid-1950s. Seen by many as a true pioneer in Canadian news photography (some even call him the “father of Canadian photojournalism”), he worked on contract for various newspapers (including the Ottawa Citizen), the National Film Board and the Canadian Government Travel Bureau. During his career, Grant photographed many leadership campaigns, elections (federal and provincial) and first ministers’ conferences. While following the campaign of Progressive Conservative leader Robert Stanfield, Grant befriended a young Joe Clark, the future prime minister, and made connections with his political entourage and family. Many black-and-white photos in the Joe Clark fonds and Ted Grant fonds show Clark during public appearances such as his swearing-in ceremony as well as in more private settings such as working meetings with his principal advisors.

The special relationship between Ted Grant and the Clarks gave him access to the Prime Minister’s private and family life. The photographer took the very first photos of Catherine, the couple’s only child, and he was invited to informal family gatherings and garden parties. Though Grant was in the room, the Clarks seemed able to ignore his camera. According to Clark’s wife, Maureen McTeer, the photographer knew how to be patient and keep a low profile: “Ted will wait for the photograph. If you are aware of his presence, he will wait until you are not. That is a very unusual quality for a photographer” (Fayle, p. 75). But while Grant captured happy moments, such as the Prime Minister sitting on the floor at 24 Sussex Drive relaxing with his wife and daughter, he also caught times of obvious disappointment, including election night 1980.

Prime Minister Joe Clark and his family (spouse Maureen McTeer and daughter Catherine) at 24 Sussex Drive (e002712822). This photograph is an excellent example of the exceptional, trusting relationship between the Clark family and photographer Ted Grant. Over several decades, Grant documented many important events in Clark’s career, as well as intimate family moments.

Because news photographers capture an instant, it is not surprising that their photo collections include snapshots of prime ministers in the heat of political action. Consider, for instance, the Louis Jaques photo of a young John Diefenbaker speaking in the House as an MP aspiring to become leader of the Progressive Conservative Party of Canada. Or the Robert Cooper photo of John Turner speaking to a crowd during his campaign for the leadership of the Liberal Party of Canada. 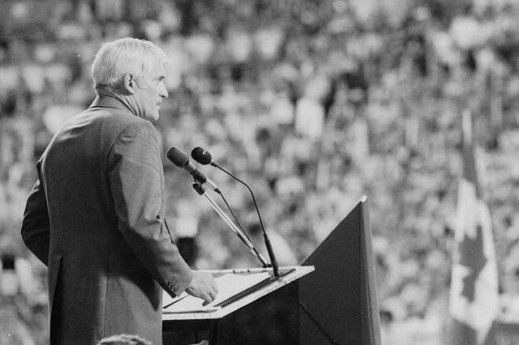 John Turner speaking to a crowd in Ottawa, at the Liberal Leadership Convention in 1984. Photograph by Robert Cooper (a152415)

Interestingly, nearly half of the photographs preserved by LAC are in photojournalism collections. Ted Grant’s collection alone includes almost 216,000 black-and-white and colour photographs, photo negatives and contact sheets, while there are 175,000 in the Duncan Cameron collection. Much like Grant, Duncan Cameron began his career as a news journalist in the 1950s. Born in Glasgow, Scotland, Cameron immigrated to Canada in 1954 and covered Parliament Hill for many years, photographing and forming relationships with various political figures. Cameron was also a contract photographer for Time Life Inc. from 1963 to 1976, and he completed his career at the Public Archives of Canada, to which he donated his collection. 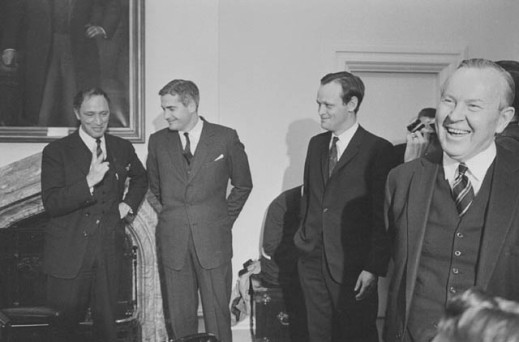 In short, the collections created by news photographers not only document Canada’s political history in exceptional ways but also highlight more private times in the lives of Canadian prime ministers. Whether capturing the heat of a moment or a moment of quiet, or the rise or fall of a prime minister, these artists have managed to capture different sides of prime ministers’ personalities.

Maude-Emmanuelle Lambert is an archivist in the Private Archives Division, Science and Governance, at Library and Archives Canada.