Content warning: This blog contains graphic content (death/medical/amputation) that may be offensive or triggering to some readers.

When I first began working at Library and Archives Canada (LAC) in 2018, I naturally did a quick search to see what we had from my hometown in Labrador in the collection. I simply typed “Rigolet” and got a few hits, including one record that had yet to be digitized: “A wedding in Rigolet, 1923.” Because it was not digitized, I put it on the back burner and forgot about it until last summer, when I was searching through the International Grenfell Association (IGA) collection from the same time period. I thought I would give it a shot and ordered the box to take a look. When the photos came, I flipped through quickly, looking for that photo; I just had a hunch it was going to be something interesting. After all, the population of my community is only 320, so I was bound to know the family and their relatives.

I finally found it at the back of the batch.

Wait, I know that face.

Once, many years ago, I drew a portrait of him for my grandmother’s Christmas present, so I knew that face well. It was indeed him, my great-grandfather “Papa Wilfred,” and standing to his left was my grandmother’s mother, Beatrice! For all those years, the photo was tucked away in the archives, and I could finally show it to my family members back home!

I posted the image to Facebook, tagging Project Naming in the hope that we might be able to identify more people in the photo. Within minutes, we were in luck. The woman standing to his right is his mother, Sarah Susanna, and kneeling between them is well-known Inuk nurse Kirkina Mucko (born Elizabeth Jeffries). Reports vary, but local lore says that Elizabeth’s mother was in labour and her father went to find a midwife. When he got back to their home, his wife and their newborn baby had died, and little Elizabeth, age two, had severe frostbite on her legs and gangrene had set in. There were no doctors in the vicinity. He made the difficult decision to amputate Elizabeth’s legs himself using an axe. To stop the bleeding, he put her legs in a flour barrel! An article from years later states that when the local doctor Wilfred Grenfell (who later became Sir Wilfred Grenfell) learned of her story, he wept. Consequently, Grenfell took Elizabeth to the orphanage in St. Anthony, Newfoundland, and was able to raise money to provide her with artificial limbs. She travelled with him to the United States and Mexico to help raise funds for the IGA. The IGA provided health care to everyone in Labrador at that time, as well as conducting other charitable endeavours. 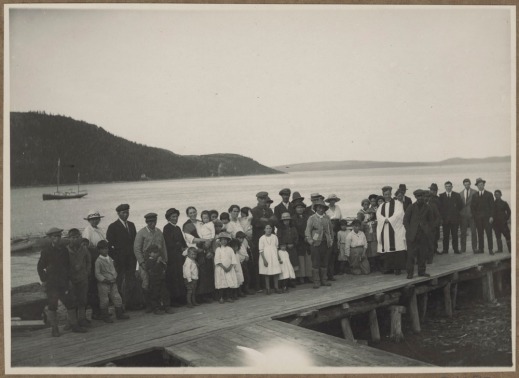 People from 20 miles around gathered for the annual service of the Anglican clergyman Parson Gordon, who is wearing his robes and standing toward the right of the group (e011439717)

Later, a doctor in Boston, for reasons unknown, changed her name to Kirkina. As stated by other Inuit regarding this era, Inuit children in southern hospitals were sometimes treated like pets. As such, they were taken home and raised by hospital staff, never to be heard from again by their families in the Arctic. I presume that this attitude is what led the doctor to change Elizabeth’s name. Her name changed once more when she was married and became Kirkina Mucko.

During the 1918 Spanish influenza epidemic, Kirkina lost her husband and between three and six of her children (some accounts may have included her stepchildren, which would explain the discrepancy). Spurred by this immense loss, Kirkina decided to become a nurse. She received her training and went on to specialize in midwifery. Her career spanned 36 years! Many mentions of Kirkina Mucko and her amazing story can be found in newspaper articles as well as in writings from the IGA, many of which are in the holdings at LAC. In 2008, the local women’s shelter in Rigolet was named Kirkina House as a tribute to her strength and perseverance.

Heather Campbell is an Inuk artist originally from Nunatsiavut, Newfoundland and Labrador. She was a researcher on the We Are Here: Sharing Stories team at Library and Archives Canada. 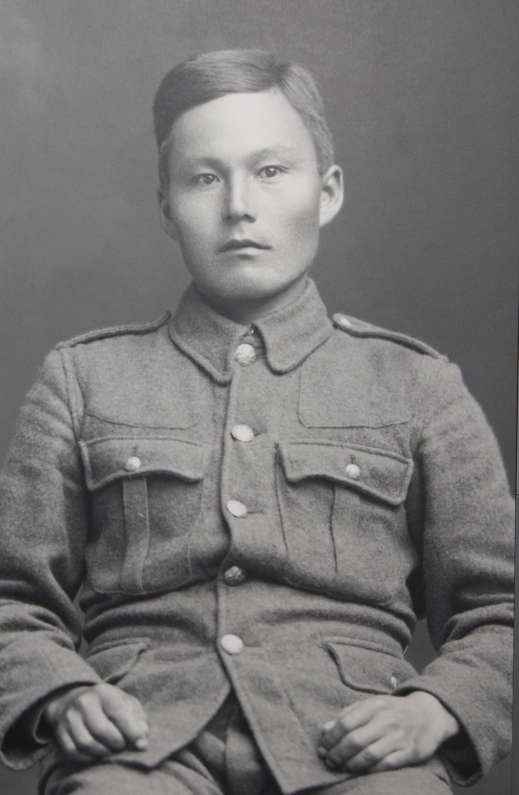 As we remember the sacrifices of the soldiers who fought in the First and Second World Wars, many of us are aware of the First Nations and Métis soldiers who fought for our country. But only a few of us may know about the Inuit soldiers who also fought alongside Indigenous and non-Indigenous alike. My great-great-uncle, Lance Corporal John Shiwak, was one of those men. Due to his skills as a hunter, he became a sniper—“one of the best in the British Army,” according to a fellow officer.

My uncle hailed from Nunatsiavut, the Inuit region in northern and central Labrador, which was part of the British Dominion of Newfoundland in 1914. When the call came for Newfoundland men to enlist, it also made its way up the north coast of Labrador to the Inuit men of these settlements. Inuit culture was, and still is, largely a non-confrontational culture. Many of these young Inuit men were encouraged to enlist by people in positions of authority, such as Dr. Harry Paddon, a physician for the International Grenfell Association. Regardless of their motivations, approximately fifteen Inuit men enlisted and set sail for England in the summer of 1915. 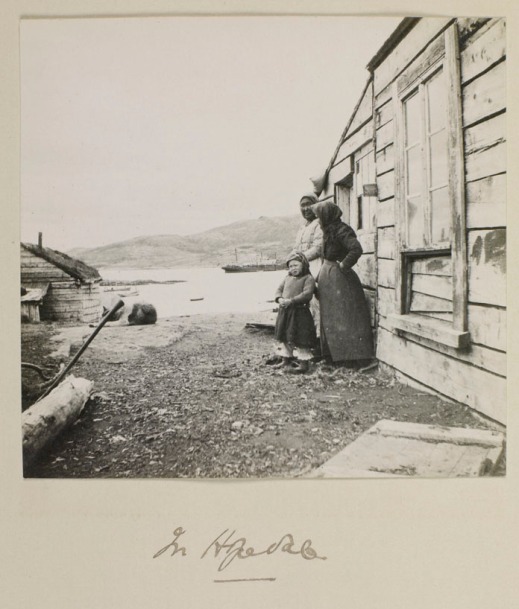 What a culture shock it must have been for these men who, like my uncle, were all from tiny, isolated communities of a few hundred people at most. In addition to the size, hustle and bustle of European towns and cities, the worldview was very different. Although Inuit hunt for survival, we respect each life we take and are taught from a young age to not cause an animal pain or distress. When we take a shot, we want to be certain it is precise and effective. Especially during the early 20th century, when the cost and scarcity of ammunition meant that every bullet had to count. Sometimes that meant going home empty handed.

I imagine those Inuit soldiers felt exactly the same way when they discharged their firearms in war. It must have been a huge adjustment for them to fire in haste, knowing they may have wounded someone. However, they knew that the men on the other side of the trenches had to be stopped for others to live, just as animals in Labrador had to die for their families to live. I imagine it was the only way to reconcile themselves with the horrors of war. 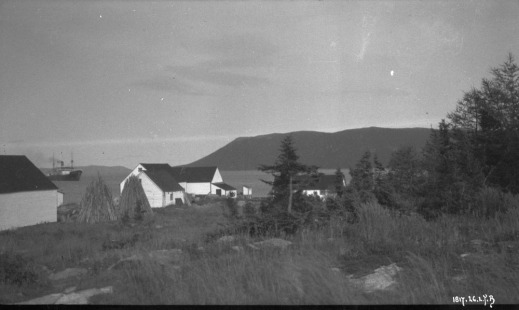 The story of my great-great-uncle Lance Corporal John Shiwak is unique because in addition to his traditional activities as a hunter, trapper and fisherman, he was also a writer, poet and artist. He wrote many letters from the front lines to his friend Lacey Amy, a journalist and author from Ontario. Mr. Amy wrote the article “An Eskimo Patriot” in the July 1918 issue of The Canadian Magazine, telling of their friendship and some of Uncle John’s feelings during the war.

The duration of the war was wearing on him. He had no close friends, none to keep warm the link with his distant home. In September he lamented: “I have no letters from home since July. There will be no more now till the ice breaks”. And in his last he longed again for the old hunting days. Labrador, that had never satisfied his ambitions, looked warm and friendly to him now… That was in mid-November. A month later an official envelope came to me. Inside was my last letter. On its face was the soulless stamp. “Deceased”.

Every year on Remembrance Day, our family would talk about Uncle John with a quiet reverence, remembering the deep grief experienced when he did not return home. I have yet to meet a Labradorian living elsewhere who does not long to return to Labrador. The connection that we have to the land is difficult to express. We see firsthand how the land provides us with everything that we need to survive. Many generations of history are embedded in not only the community, but also each fishing spot, trapline, woodcutting path, hunting ground and berry-picking spot. This creates a special bond between people and the land. To be away from Labrador is to be disconnected from a piece of ourselves.

When I first visited the Canadian War Museum, I was drawn to the recreation of a First World War trench. Visitors can walk through it and put themselves in the shoes of soldiers on the front lines. As I slowly made my way through the trench, it affected me deeply. Tears streamed down my face as I imagined Uncle John huddled in the mud, writing in his journal or sketching images of the land and animals, longing for the peace and solitude of his ancestral home. A home that he would never see again. 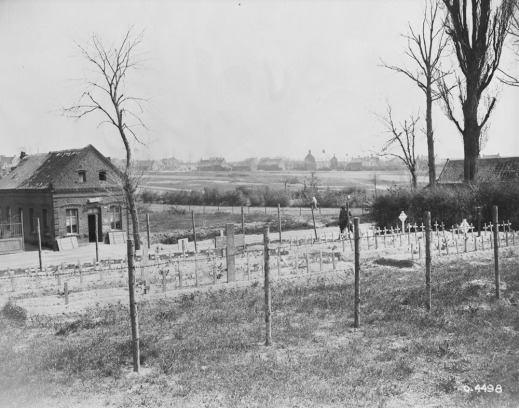 Raillencourt British Cemetery near Cambrai. Shiwak was not buried in this cemetery, but was equally far from home. (a004409-v8)

During the battle of Cambrai on November 20, 1917, an exploding shell killed Uncle John and six other soldiers. Eighty-eight years later, in 2005, my cousin, Jason Sikoak (formerly written as Shiwak), took part in the Aboriginal Spiritual Journey. In this journey, a group of Indigenous people travelled to Europe to honour Indigenous soldiers. Jason told me that during this journey, Uncle John’s spirit visited him in a dream. We hope that he followed Jason back to the shores of Rigolet and that he is at peace. 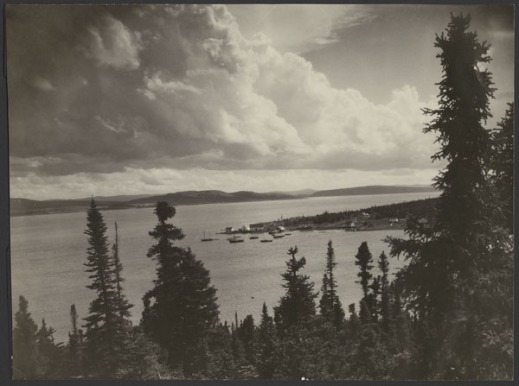 A point of land seen from a distance with Hudson’s Bay Company buildings along the shoreline and boats anchored in the cove. Rigolet, c.1930. Photo credit: Fred. C. Sears (e010771588)

Heather Campbell is an archivist in  the Public Services Branch at Library and Archives Canada.