The final design for the Coat of Arms of Canada, 1921. Illustration by Alexander Scott Carter. (e008319450) The signatures of the committee members, including Dominion Archivist Arthur Doughty, appear in the bottom right-hand corner.

Library and Archives Canada preserves the records of the committee that designed the coat of arms. This committee, struck by the federal cabinet in 1919, included Dominion Archivist Arthur Doughty. Unlike the flag debate some four decades later, the coat of arms question never prompted a parliamentary debate or widespread public discussion. As a result, few Canadians know much about the deliberations that led to the adoption of the coat of arms, and popular myths about the emblem’s history and meanings have filled the gap. Here are five misconceptions, debunked by primary sources.

Myth # 1: The three maple leaves on a single stem were chosen to represent Canadian multiculturalism.

The three maple leaves on the shield are the Arms’ most distinctively Canadian feature. Since the 1960s, some commentators have suggested that this arrangement of leaves represents the unity of Canadians of different backgrounds. In her twangy ballad Three Red Leaves, written during the Great Flag Debate of 1964, country-and-western singer Diane Leigh praised the “Three red leaves all tied together / [that] Bind three nationalities in unity / English, French, and new Canadians / Living in this land of opportunity.” Until very recently, some official publications also described the leaves as symbolizing Canadians of all origins, including First Nations, Inuit, and the Métis Nation, who were conspicuously absent from Leigh’s lyrics.

An emblem’s meaning evolves with the country it represents, so the symbolism of “unity in diversity” is attractive today. However, there is no evidence that the committee intended the leaves to represent this Canadian ideal. Rather, a sprig of three maple leaves was already a popular emblem by 1921. It first appeared as decoration on a Saint-Jean-Baptiste Day poster in 1850. The three-leaf motif also appears on the provincial arms of Quebec and Ontario, which the heralds of the College of Arms in London designed in 1868. In 1868, as in 1921, the choice of three leaves was probably aesthetic rather than symbolic: three leaves fill the triangular base of a heraldic shield better than one.

A poster advertising the annual procession of the Association Saint-Jean-Baptiste, Montréal, June 24, 1850. (OCLC 1007829742) This is perhaps the earliest use of three maple leaves on a single stem.

Myth # 2: King George V chose red and white to be the national colours of Canada.

Beginning in the 1940s, Colonel Archer Fortescue Duguid, a military historian and heraldry enthusiast, suggested that King George V had chosen red and white to be Canada’s national colours because these were the colours of the wreath and mantling—the flowing cloth around the helmet—of the Arms of Canada. Therefore, Duguid argued, a new Canadian flag must also be red and white.

The idea that the Arms design would determine Canada’s national colours originated in 1918 with Eugène Fiset, the Deputy Minister of Defence. To Fiset, red suggested Britishness, military sacrifice, and autumn splendour. White evoked chilly Canadian winters. The coat of arms committee’s first design incorporated Fiset’s proposed red maple leaves on a white background, as well as a red-and-white wreath on top of the shield. 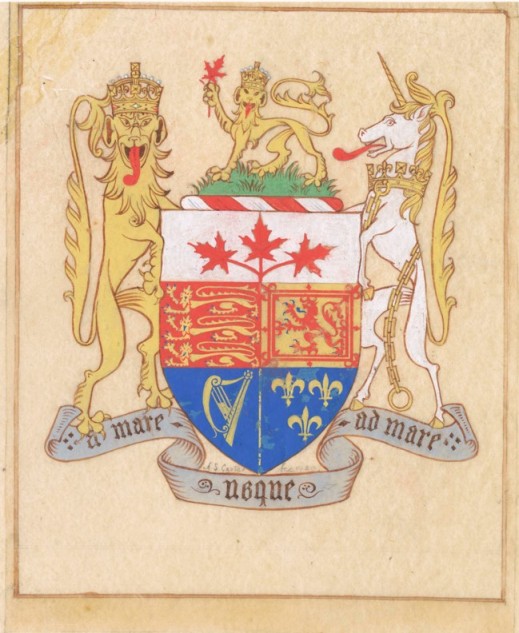 However, not everyone was a fan. Sir Joseph Pope, Undersecretary of State for External Affairs, preferred green maple leaves to red ones, which to him suggested death and decay. In the end, Pope prevailed, but the red-and-white mantling remained, probably by accident.

No one, least of all the King, cared much about the mantling in 1921. When a concerned citizen complained in 1922 that the mantling should be red and gold—the main colours of the shield—committee members shrugged and replied that it was too late to make changes. Neither the royal proclamation nor an official pamphlet issued in 1922 to explain the Arms’ symbolism mentions national colours. In 1946, during parliamentary hearings on a new Canadian flag, heraldry buff Hugh Savage rebutted Duguid: a national flag, not a coat of arms, typically gave a country its “national colours.”

Nevertheless, Duguid’s theory convinced many people and contributed to the choice of red and white for the Canadian flag in 1964.

The supporters in the form of a lion and a unicorn are borrowed from the Royal Arms of the United Kingdom, reflecting the Imperial loyalties of the committee. The unicorn originally represented Scotland. Its chain perhaps recalls medieval legends about how difficult it is to tame these mythical beasts.

Because the Canadian chained unicorn also holds a royal French banner, some have interpreted this depiction as symbolizing British dominance over French Canada. There is no evidence that the committee intended, or even considered, this possible interpretation.

However, the committee’s inclusion of three gold fleurs-de-lis on the shield did concern the King’s heraldic advisors. The College of Arms worried that the fleurs-de-lis, intended to honour French Canadians, might imply that Canada claimed sovereignty over France! Canada’s Commissioner-General in Paris discreetly confirmed with French officials that the design would not spark a diplomatic spat.

Counter-proposal from the College of Arms, London, September 1921. (e011313801) The English College of Arms suggested a new placement of the fleurs-de-lis so as not to imply that Canada ruled France. The Canadians rejected this idea.

Myth # 4: The committee that designed the coat of arms did not consider including Indigenous symbols in the design.

The symbols of two colonizing powers, Great Britain and France, dominate the Arms of Canada; there is no reference to Indigenous peoples. Yet one proposed design did spark a discussion with respect to featuring First Nations figures as supporters. It was a submission from Edward Marion Chadwick, a Toronto lawyer interested in both heraldry and First Nations cultures. 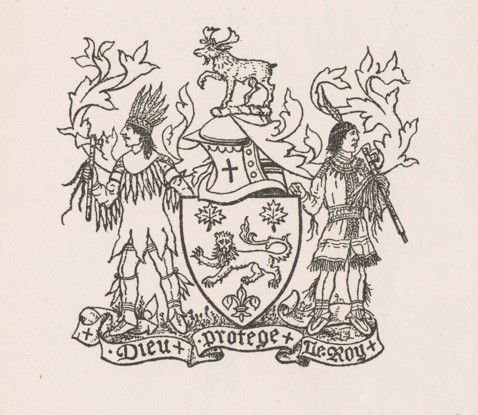 Including Indigenous figures and emblems in colonial heraldry was not unprecedented. The centuries-old arms of Nova Scotia and Newfoundland and Labrador both have First Nations figures as supporters, and the pre-Confederation seal of Upper Canada included a calumet, or ceremonial pipe, to commemorate treaties and alliances. However, to Sir Joseph Pope, who often spoke for the coat of arms committee, Indigenous peoples were a forgettable part of the past. “I myself do not see any necessity for commemorating the Indians at all,” wrote Pope in dismissing Chadwick’s proposal.

Pope’s response was racist, and reflected the opinion of many white Canadians of the time. Few people today would approve of Chadwick’s design either, but for very different reasons. Chadwick did strive to depict clothing and regalia accurately. However, to modern eyes, his proposal smacks of stereotyping and cultural appropriation. His supporters are “noble savages,” romantic fantasies of what First Nations individuals look like. They represent regions of the country rather than constitute meaningful inclusion of Indigenous people, who were not consulted about the coat of arms project. Today, many Indigenous individuals rightfully object to the way that they have appeared in heraldry. As a result, the provincial government of Newfoundland and Labrador, for example, is now reconsidering how First Nations individuals are depicted on its coat of arms, designed in 1635. Canada would undoubtedly be doing the same if Chadwick’s design had prevailed.

Myth # 5: The Arms of Canada can never be changed.

Could the Canadian government change the Arms of Canada to make them more representative of a diverse country? Coats of arms have an air of ancient permanence, but even very old emblems can evolve. For example, the Royal Arms of the United Kingdom—the model for Canada’s Arms—have changed half a dozen times since the union of the English and Scottish crowns, in 1603, most recently  in 1837). Since 1921, artists have twice reinterpreted the official version of the Arms of Canada, in 1957 and 1994, to update its “look and feel” without changing the formal elements.

If, one day, the Government of Canada wants to change the Arms design, it will require the collaboration of the Canadian Heraldic Authority, the division of the Office of the Secretary to the Governor General responsible for granting and registering coats of arms in Canada. The next time a major change occurs, there will be no need to consult British heraldic authorities, though the Queen (or King) will still have to approve the final design.

Whether it resulted in modifications to the current arms or in a completely new design, the process today would undoubtedly be more participatory—and more transparent—than it was a century ago.

Forrest Pass is a curator with the Exhibitions team at Library and Archives Canada.