A.F. Duguid, an early Canadian military historian, noted as he researched the First World War in its aftermath, “It is remarkable how much of the most useful historical material is still held in private possession.” (Clio’s Warriors by Tim Cook, page 79)

The photographs of the Canadian War Records Office photographic collection (accession 1964-114) are illustrative of the life and work of soldiers during the First World War. As many of the photographs are digitized and available online, they are heavily used by researchers.

That said, many researchers come to Library and Archives Canada (LAC) wanting to see images of the conflict that aren’t part of the official government records. This is a great example of when our private holdings—archival documents donated to LAC by individuals or organizations—can serve as an excellent complement to government holdings by providing an alternative view of an historic event.

This blog post highlights three fonds within our holdings, but there are many more. Please note that the complete references are provided below (in italics) to allow researchers to easily order the material for consultation, as not all of the items are digitized.

Comments: Search using the keyword “1974-137” in Collection Search to see descriptions and digitized images for a portion of the collection.

Content Description: Photographic material depicting […] activities and personnel of No. 3 Stationary Hospital, C.A.M.C., in Canada, England, and in the Mediterranean theatre of operations while based on the island of Lemmos, 1915–1917; photographs by E.R Owen of staff, patients, faculties, major events and visitors at the Duchess of Connaught’s Canadian Red Cross Hospital, Taplow, England, 1915–1916; photographs from the First World War (ROSS, ANNE E. 1982-174 05618, ROSS, ANNE E. 1965-041 05680A).

If you’re interested in discovering these or other photographs held in private fonds at LAC, please contact us using our online form.

Rebecca Murray is a reference archivist in the Reference Services Division of Library and Archives Canada.

As the second half of the 19th century began, Quebec was entering a period of industrial growth. Montréal, located on one of the largest canal networks in North America, became a strategic industrial centre. The expansion of its seaport, the extension of the Lachine Canal, and the use of water power attracted many investors. Seizing the opportunity, businessmen established a wide range of factories, including foundries, to process raw materials. The Montreal Rolling Mills Co., which specialized in making steel products, became one of the city’s most prosperous firms.

Library and Archives Canada (LAC) has seven metres of documents produced by the Montreal Rolling Mills Co., stored in the Steel Company of Canada Limited archives (R15513). In 1910, this company, created by the merger of five major steel firms (Montreal Rolling Mills Co., Hamilton Steel and Iron Company, Canada Screw Company, Canada Bolt and Nut Co., and Dominion Wire Manufacturing Co.), established its headquarters in Hamilton, Ontario. Property titles, sales contracts, insurance contracts, financial statements and other documents for the management and day-to-day business of the company were archived in Hamilton until they were transferred to LAC in 2006. Most of them are textual records and technical drawings. There are few photographs, but this absence may be offset by the archives of the Dominion Bridge Company, also held by LAC.

Among the most important Montreal Rolling Mills Co. documents are account books, shareholder lists and transactions, minutes of meetings, correspondence between merchants, financial statements, and contracts for the purchase of land and buildings located along the Lachine Canal. The documents make it possible to analyze in detail the industrial changes that took place in Montréal in the 19th and early 20th centuries.

On May 8, 1868, the year after Confederation, several Montréal hardware merchants met in the offices of Morland, Watson & Company to form a new company: the Montreal Rolling Mills Co.

END_OF_DOCUMENT_TOKEN_TO_BE_REPLACED

“I have always wanted to breathe the atmosphere of the New World,” writes Lord Dufferin, the third Governor General of Canada, to his close friends Mr. and Mrs. Sturgis. It was 1872 and Dufferin was preparing for his move to Canada, where he would spend the majority of the next six years.

When most of us think of the early governors general we may imagine stuffy noblemen coming to Canada as part of their duty to the monarchy. Sometimes it is hard to think of them as real people at all. These twelve letters, purchased by LAC at an auction in the summer of 2016, offer Canadians a glimpse into the motives and experiences of one of these aristocrats.

Lord and Lady Dufferin, and their children, dressed as the Court of King James V of Scotland in Ottawa, 1876 (MIKAN 3819711)

Lord Dufferin, although initially excited about the adventure of the “New World”, soon had to face the reality of what it meant to live in Canada in the 1870s. He was rather unimpressed with the living situation in Ottawa, complaining that the Governor General’s residence did not have enough space to entertain, that the roads were “strips of mud” and that the city was unfinished. He complained of the cold and the lack of things to do and soon realized that his time here would not be the exciting adventure for which he had hoped. 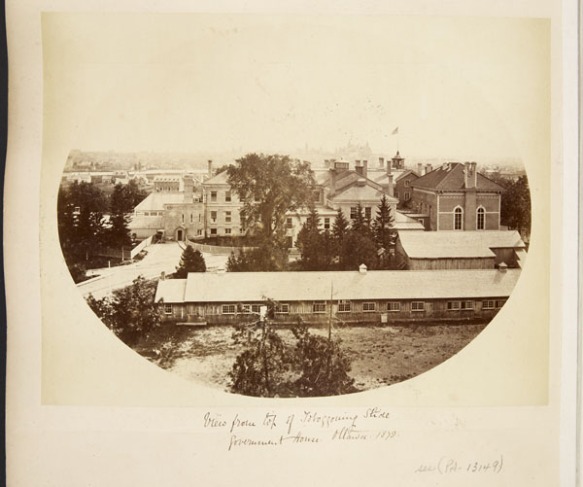 While the living situation was not always up to his standards, Lord Dufferin took his position seriously. His letters discuss his efforts to bring “prestige” back to the job of Governor General. He also wrote about his opinions and actions as a neutral observer of one of the biggest political scandals of the time. The Pacific scandal saw the resignation of John A. Macdonald and the rise to power of Alexander Mackenzie and the Liberal party. Lord Dufferin’s letters discuss the scandal, expressing both sympathy for Macdonald and hope that the Opposition’s rise to power would be of benefit to Canada. From his letters, it is clear that he liked and respected both leaders. 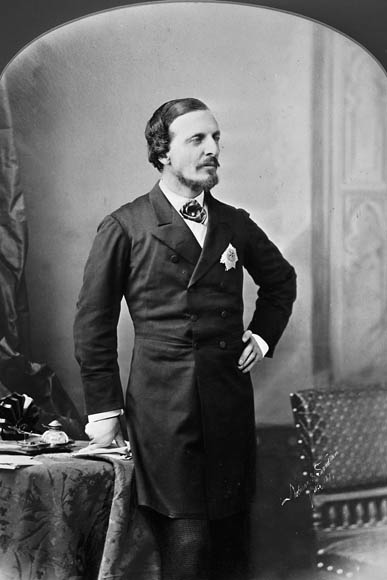 The Lord Dufferin letters lift the curtain a bit, offering us a more personal look at one of our early governors general. Lord Dufferin came to Canada to escape his boredom with the London scene and in search of something new. Although he was not always completely happy here, he worked hard to uphold the importance of the position. He was also diplomatic, having his own opinions on the Pacific scandal, but maintaining good working relationships with both leaders. Dufferin was Governor General at a crucial time. Canada had just become a country, the expansion west was just beginning, and Ottawa was a city “in progress”. The Dufferin letters not only humanize the man, they also ground the world in which he lived, breathing life into it and making it tangible for Canadians today.

Kelly Ferguson is a Master’s student from Carleton University working in the Governance and Political Archives Section at Library and Archives Canada.

With the summer season here, many of us anticipate road trips, family reunions or exploring areas of interest—some destinations may be quite secluded while others are better known.

Are you wondering about that old mill, church or schoolhouse on the recreational trail that you recently discovered? Perhaps your daily commute takes you by a vacant old house, or maybe a small hamlet on your way to the cottage piques your curiosity. Or are you trying to locate the residence where your ancestor lived in 1905, but have been unable to find it?

Ghost towns are villages, towns or cities that experience a considerable population decrease and show signs of abandonment and decay. One might think of ghost towns as “geographical ancestors”—predecessors that no longer exist.

Library and Archives Canada holds many archival resources and publications to help you find out more about that lesser-known place.

Census records list the residents of a location and in many cases provide details such as the year of birth, occupation and religious denomination of the residents. You can find more information about Canadian provinces and territories on our Places page. The Post Offices and Postmasters database documents the establishment and closing of post offices and gives helpful timeline information. The Search Help pages accompanying each database will help you understand the records and how to search them.

Discover what has been written about ghost towns (such as Val-Jalbert or Depot Harbour) and abandoned places using the Library Search function in our AMICUS library catalogue to research a specific area using the location’s name, or subject keywords such as “ghost town” or “abandoned.”

Safe travels and happy discoveries on your road trip! 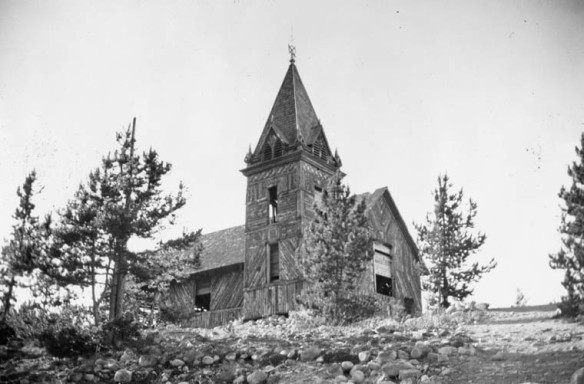 Marthe Séguin-Muntz is a Project Officer in the Private Archives Branch of Library and Archives Canada.

Louise de Kiriline Lawrence (neé Flach) was born in Sweden in 1894 into a wealthy and well connected family. She was extremely well educated and fluent in five languages. She chose nursing as a profession and joined the Red Cross to work in Denmark at a prisoner-of-war exchange camp. It was here that she nursed back to health then married Gleb de Kiriline, a wounded Russian officer. The two then moved to live and work in northern Russia. Gleb de Kiriline went missing after the Bolshevik revolution and Louise spent four years in a futile search to find him. 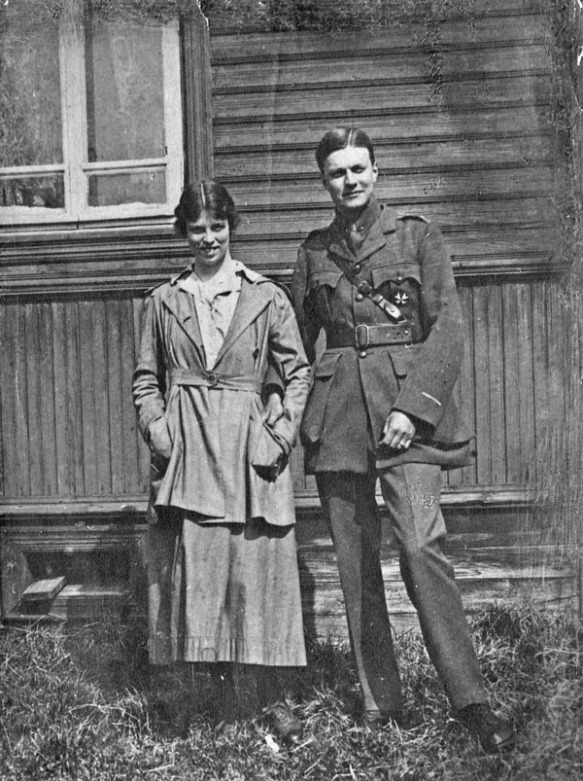 In 1927, Louise immigrated to Canada where she worked as a Red Cross nurse in Northern Ontario. She became the head nurse to the Dionne quintuplets and played a crucial role in their survival during the first year of their lives. Due to the notoriety of the Quints, Louise wrote a series of articles for Chatelaine magazine chronicling her experiences with the children and their family. She retired from nursing in 1935.

De Kiriline Lawrence conducted the majority of her nature studies and nature writing from her property on Pimisi Bay, in Northern Ontario. It was here, while living in a log cabin, that she began banding birds, keeping diaries, creating sketchbooks and writing hundreds of articles for various nature publications along with several books including her autobiography entitled Another Winter, Another Spring: A Love Remembered.

LAC is now the guardian of the Louise de Kiriline Lawrence fonds. It includes material pertaining to wildlife studies, bird data and illustrations along with ornithological reports, correspondence both personal and professional, book and periodical notes and manuscripts along with family papers. Also included are over one hundred drawings, over 700 photographs, audio material, award medals, wood blocks and a few lithographs as well as material regarding her life in Sweden and Russia.

Judith Enright is an archival assistant in the Aboriginal and Social Affairs Section of the Private Archives Branch of Library and Archives Canada.

As mentioned in previous articles, the collection at Library and Archives Canada (LAC) contains a vast amount of information regarding Queen Elizabeth II. In this last article on The Queen, we present a selection of textual materials held by LAC. While few of them have been digitized, the descriptions are all accessible online so you can discover the contents.

Her Majesty Queen Elizabeth II and Prime Minister of Canada Lester B. Pearson in the minirail at Expo 67 (MIKAN 3198474)

As mentioned in previous articles, the collection at LAC contains a vast amount of information regarding Queen Elizabeth II. In this last article on The Queen, we present a selection of textual materials held by LAC. While few of them have been digitized, the descriptions are all accessible online so you can discover the contents.

Questions or comments? We would love to hear from you!