When searching an archive, all too often we find things in places where we would not ordinarily expect. The life journeys of explorers, researchers, anthropologists and other individuals who have donated material to an archive are integral to identifying the scope of a given collection. Frederick W. Waugh was an ethnologist who worked for a time with the Anthropology Division of the Geological Survey of Canada. His visit to the Inuit community of Nain in Nunatsiavut, the region of Inuit Nunangat situated in northern Labrador, in 1921–22 is reflected in a photo album his son R.F. Waugh donated to Library and Archives Canada (LAC).

Frederick Waugh had set out for Labrador in 1921, noting in his journal his intent to photograph and study Montagnais people (now Innu Nation [Naskapi–Montagnais]). However, Waugh ended up at Nain and primarily photographed and documented Inuit who lived in that area. His photographs, in an album at LAC, provide a glimpse into the everyday life of Nainimiut: dogsledding, gathering driftwood, skinning seals, ice fishing and more.

The album captures an interesting time in the community. In Nunatsiavut, Moravian ties are strong and many Nunatsiavummiut (Inuit of Nunatsiavut) still follow Moravian practices. German-speaking Moravian missionaries from Europe began settling in Labrador in the late 1700s. They established eight missions along the coast, one of which was Nain in 1771. In 1921, the Moravian church in Nain burned down. Waugh’s photographs captured the early efforts to rebuild the church using debris from the original structure (pictured here). The Memorial University Archives has images of the Moravian church before the fire, as well as other photographs of Nain in this period. 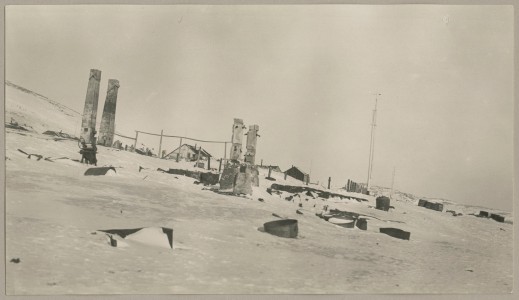 The Canadian Museum of History houses copies of similar photographs, as well as Waugh’s journals. His journals from this period were titled “Labrador Eskimo Notes.” These journals provide a detailed account of various medicines, games, hunting practices, food knowledge and customs. As noted in his journals from Labrador, one of his most frequent sources was Amos Voisey.

Archives can sometimes be tangled webs that are difficult to navigate. I hope that by highlighting this album, it will help connect some of the dots for others who are interested in content relating to Nain, or Fredrik W. Waugh himself. Some of the names of those pictured in the photos may be inaccurate. We encourage you to reach out if you have any additional information that could help us create a more accurate record.

All in all, these beautiful photographs speak for themselves.

If you are interested in Nain, Nunatsiavut and the Nunatsiavummiut, visit Heather Campbell’s blog about Judith Pauline White.

Jennelle Doyle is an archivist with the Listen, Hear Our Voices initiative at Library and Archives Canada. Jennelle grew up in Churchill Falls, Labrador, her family being from both the south coast of Labrador and the island of Newfoundland. She has been located in Ottawa since 2019 and is currently a master’s student at the University of Ottawa while continuing her work on the initiative.

Traditionally, qimmiit (sled dogs) were an important part of Inuit culture. They represented a way of life and a connection to the land. Qimmiit were especially useful in transportation, safety and hunting. Today, however, the relationship between Inuit and qimmiit has changed, in part because of permanent settlement and a massive decline in the qimmiit population. Qimmiit have become more of a symbol or a connection to the cultural past.

Travelling by qimuksiqtuq offered other benefits, including safety and protection. On account of their acute senses, qimmiit were useful for their ability to find their way home, or even a temporary camp, if a traveller were caught in a blizzard or a whiteout. Qimmiit were also useful to Inuit for travelling safely over ice. They were better able to sense whether the ice was too thin, and were usually able to avoid such areas. Qimmiit could also spread out and disperse their weight when travelling over thinner ice, making it less likely for a sled to fall through. However, even if a qimmiq (a single dog) fell through the ice, not every dog—or the traveler—would necessarily be endangered.

Qimmiit offered safety to Inuit in another way: from the threat of polar bears. Polar bears can be aggressive toward humans; they can pose a real danger to Inuit communities, especially travellers. Qimmiit were ideal protection, as they could warn people about bears entering a camp. Even without training, qimmiit would instinctively fight off polar bears. Consequently, Inuit travellers were able to sleep in peace and without fear when out on the land.

In additional to protection and safety, qimmiit played an important role in assisting Inuit in seal hunting. Hunting has traditionally been a defining element of Inuit life and culture. While the dogs were not necessarily trained to hunt, Inuit relied on the keen sense of smell of qimmiit to sniff out the locations of breathing holes and seals.

Transportation, safety and assistance in hunting were all ways that qimmiit traditionally aided life in the Arctic. However, the enforced settlement of Inuit into permanent communities, and the dog slaughter during the 1950s and 1960s, resulted in a massive decline in the dog population. For more information on the slaughter, visit the Qikiqtani Truth Commission. In August 2011, the Quebec government offered an official apology for the negative effects on Inuit society of the mass slaughter of sled dogs in Nunavik (northern Quebec). This decline across the North created a profound shift in the relationship of Inuit with qimmiit. Today, qimmiit are mainly used for racing, which is a demanding and challenging sport. Dog racing has since become a celebrated new tradition in many Inuit communities. 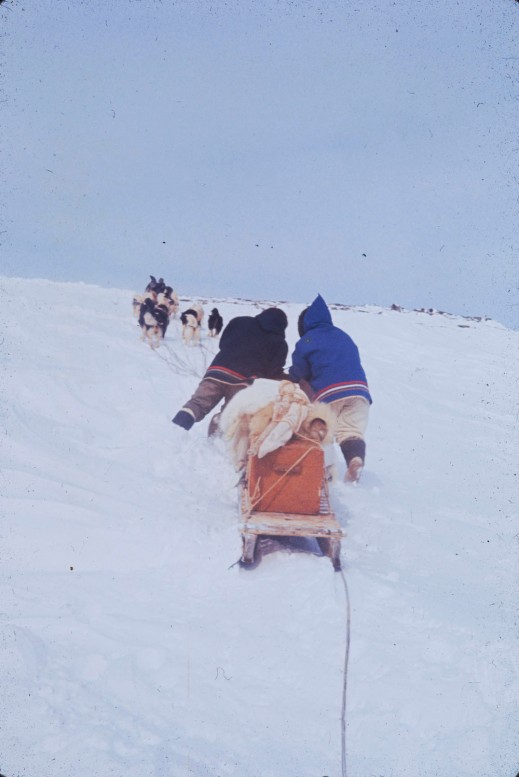 Laura Johnston, from the School of Art and Culture at Carleton University, is an undergraduate practicum student in the Public Services Branch at Library and Archives Canada.