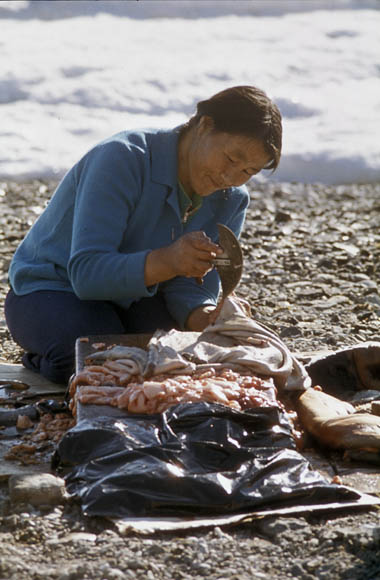 Rynee Flaherty cleaning an animal skin with an “ulu” (a short knife with a crescent-shaped blade used by Inuit women) on a stony landscape, Ausuittuq, Nunavut ( e002394465)

The ulu is a knife with a semi-circular shaped blade which translates as “women’s knife” in the Inuit language of Inuttut. Ulus date back 4,519 years ago (2500 BCE). Ulus from 1880 discovered on Baffin Island were found with the blade adhered to the handle by an adhesive made from clay, dog hair and seal blood. In the 1890s, some ulus created by Western Inuit had holes through the handle and the blade. The two pieces were joined together using rawhide, whalebone and pine root. The Copper Inuit of Victoria Island (the eighth largest island in the world and part of Nunavut and the Northwest Territories) used copper they mined to make ulu blades. When slate and copper were scarce, some Inuit turned to whale baleen or ivory for the blades. The crescent-shaped blade was originally made of slate, but today it is made of steel. Steel was available after 1719, through the Hudson’s Bay Company. Blades could be semi-circular or triangular and were attached to the handle with a single post or with the post having a piece in the centre taken out. The handle of the ulu might include ornate drawings and engravings specific to the woman who owned the knife. Handles are usually made of wood but can also be made of bone, antler or ivory. 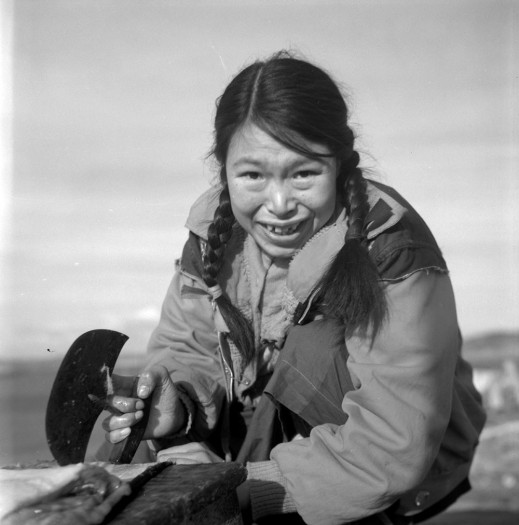 The size of an ulu depends on the personal preference of its owner or the region where it was made. A husband or other male relative sometimes presents an ulu to a woman or they are passed down from one generation to the next. 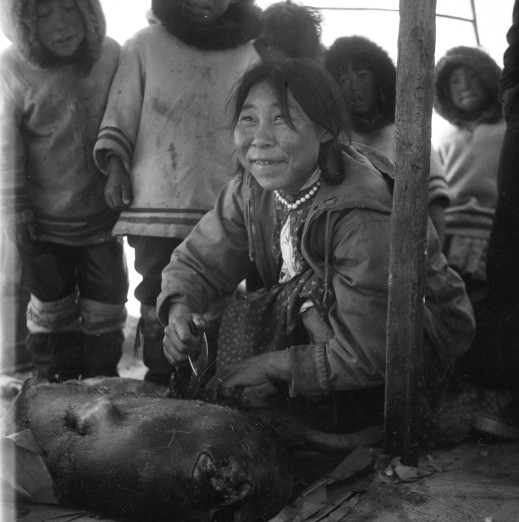 The cutting and slicing power of the ulu blade comes from the handle, allowing the force of the blade to be directed over the object to be cut. This allows the woman to cut through strong, dense objects, such as bone. The design of the ulu makes it easy to use with one hand. Ulus are multi-faceted tools that vary in design to suit diverse needs. Larger ulus cut game or fish and a smaller ulu removes blubber and shaves skin. Even smaller ulus cut skins or trim small pieces. Tiny ulus help sew or cut ornate pieces used as inlays in sealskin clothing. 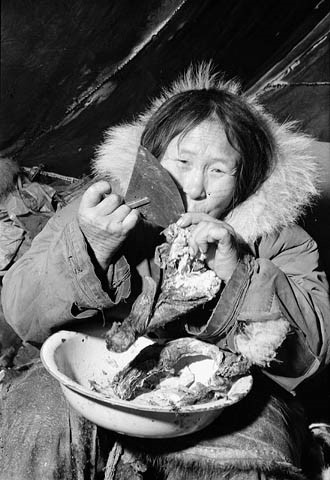 Looking at most tools designed by humans, the ulu holds a special place. It is one of the only tools that is female-centric and has become an important cultural symbol. Its likeness serves as an award medal in events such as the Arctic Winter Games and is a prominent design element in contemporary Inuit art, crafts, and fashion design. They are often displayed prominently in the home as works of art in and of themselves.  Used for thousands of years across the northern regions of North America, the ulu continues to be functional, powerful, and diverse.

Ellen Bond is a Project Assistant with the Online Content Team at Library and Archives Canada.