During the Second World War, Canadian women were mobilized to serve in the armed forces. Approximately, 50,000 women enlisted and a majority of them served with the Canadian Army. A variety of tasks were assigned to the Canadian Women’s Army Corps (CWAC) formed in 1941. These women enrolled from a sense of patriotism or a desire to see the world, no different from their male counterparts of the time.

However, they faced skepticism and harassment at home and abroad. Their perseverance coupled with wartime labour demands enabled women to work in numerous fields of work, such as mechanical and technical repairs, communications, drafting, or driving vehicles. The Canadian government and the Department of National Defence in 1943 started a recruitment drive and public relations campaign to support women contributing to the war effort. Over time their salaries increased, and public and military opinions began to change in favour of women serving in the armed forces.

The thousands of women who served their country during wartime gained new skills and expertise, confidence, and a much improved respect and support from Canadians. The CWAC was an opportunity and milestone for those choosing to step away from traditional gender roles in Canada.

On August 13, 1941, after many months of cross-country campaigning during the early days of the Second World War, women were given the opportunity to join the Canadian Army. Like the Royal Canadian Air Force, which created a women’s division a month earlier, the army recognized that women could be placed in non-combatant roles to release more men to fight overseas. At first the Canadian Women’s Army Corps (CWAC) was not a formal part of the military and operated instead as an auxiliary organization. However, on March 13, 1942 the CWAC was officially integrated into the Canadian Army. Uniforms and insignia, including badges displaying the figure of Athena were issued to army women or “CWACs” as they were commonly called. 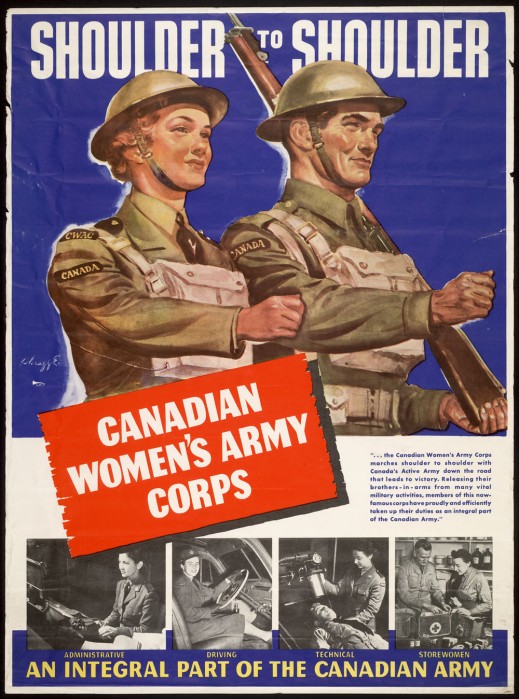 While many Canadians were supportive of women in khaki, some were apprehensive and even fearful, viewing the acceptance of female soldiers into the military as a disturbing lapse of traditional gender roles in society. In 1943 the government launched an extensive advertising campaign in an effort to address such concerns and to encourage enlistment. Recruitment materials, such as the poster above and the film Proudest Girl in the World presented female recruits as professional, respectable, and feminine, as well as eligible for various types of work.

Before commencing basic training at one of Canada’s regional training centres, recruits were given a test to determine the job for which they were best suited. In 1941 there were 30 different jobs or “trades” available and, by the end of the war, that number nearly doubled. Some positions open to CWACs were unconventional for women at the time (such as working as a mechanic) but the most numerous trades were those associated with traditionally female work, including cook, laundry worker, or typist. 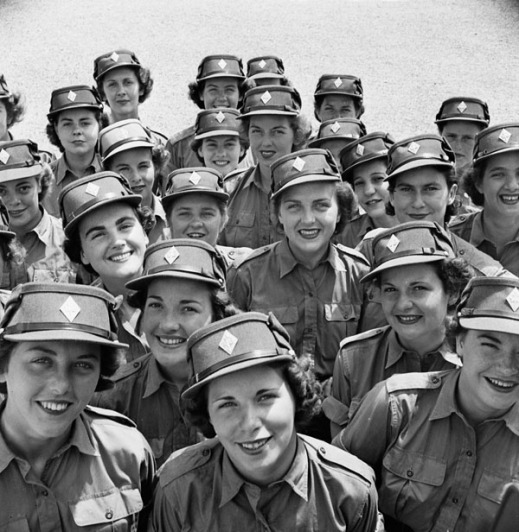 During their war service, many CWACs hoped for a posting outside of Canada, though only a few thousand were successful in obtaining such positions. Among them was Molly Lamb Bobak, Canada’s first female war artist. In addition to her paintings and sketches created to document the contributions of the CWAC, Bobak produced an illustrated diary, which today is held at LAC and available in digitized format. Peppered with self-deprecating humour, this work provides a frank and funny view into army life. You can learn more about Bobak by consulting this blog post. 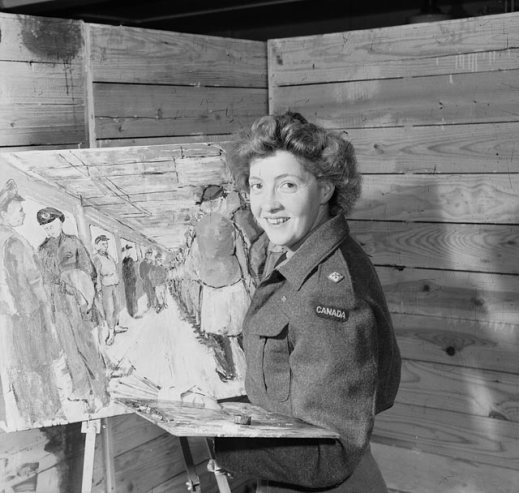 Out of the three branches of the military—army, air force and navy—the army saw the highest enlistment of Canadian women during the Second World War with a total of 21,624 recruits. The many documents related to the CWAC in LAC’s collection, some of which you can find below, help illustrate the important service of Canada’s first army women.

Laura Brown is a Military Archivist in the Government Archives Division at Library and Archives Canada.