Canadian women are part of the photographic record of the Second World War. The Department of National Defence fonds (RG24/R112) includes over two million photographs, from Comox in British Columbia to Naples in Italy. These women are our great-grandmothers, grandmothers, mothers, aunts, sisters, cousins and friends.

This Co-Lab challenge invites you to identify servicewomen and nursing sisters who served in Canada and abroad between 1942 and 1945. The photographs range from images of a single person to large groups. The selected photographs depict them at work and play, on ships, in kitchens and libraries, playing sports and dancing. In most cases, none of the women have been identified; in fact, the word “unidentified” is often part of the title of the image.

Identifying these individuals is key to having a better understanding and knowledge of the roles they played during the Second World War. In tandem with other efforts to identify images of servicewomen and nursing sisters within the archival record, this Co-Lab challenge will help to expand the narrative.

Can you help us to identify these women who served? Here are some examples of the photographs you will find in the challenge. 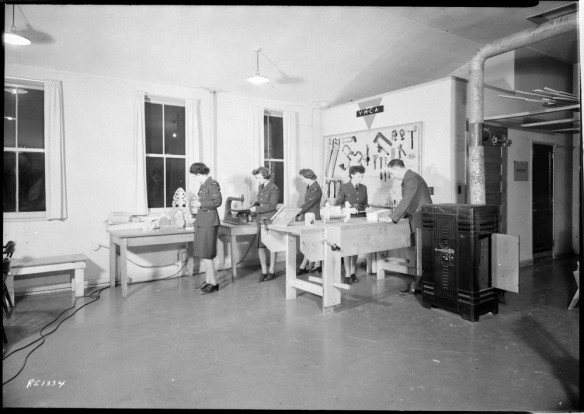 To search the holdings at Library and Archives Canada for other photographs of servicewomen and nursing sisters, use Collection Search to explore accession 1967-052, where photographs are organized by branches of the armed forces, or try a keyword search (e.g. 1967-052 Halifax Wren).

For more information on the women’s divisions in the three branches of the Canadian Armed Forces during the Second World War, please refer to these blog posts:

Canadian women served in numerous capacities throughout the Second World War—well beyond what is represented in these photographs. Naming these women and identifying them within the archival record will build a more inclusive narrative and allow generations of servicewomen, their families and Canadians to recognize and highlight the extraordinary roles that they played during the Second World War.

We invite you to use our Co-Lab tool to transcribe, tag, translate and describe digitized records in this challenge. You can also make contributions to any image through our Collection Search tool.

Rebecca Murray is a Senior Reference Archivist in the Reference Services Division at Library and Archives Canada.