Don’t you just love to dress up, spending hours upon hours devoted to selecting, conducting research on, and finally creating an impressive outfit for an exclusive costumed event? Well, many Canadians in the late nineteenth century certainly did!

A fancy dress ball was a private costumed party that grew in popularity over the course of the nineteenth century, hosted and attended primarily by the most privileged members of society. The men and women who received invitations to the events spent weeks upon weeks carefully selecting their costumes, poring over published magazines and books devoted to fancy dress, and even perusing historical books or paintings for inspiration. Popular ideas included historical dress, literary, mythological and allegorical characters, and finally, characters from “exotic” lands.

Newspapers in Ottawa, Toronto and Montreal reported extensively on the major Canadian fancy dress balls, providing detailed descriptions of the various costumes that the elite guests had worn. Many who attended the balls eagerly flocked to photography studios in the days and months following these special occasions to have their portraits taken in costume. Sometimes these portraits were used to create impressive composite photographs, including the one fabricated by Ottawa photographer William James Topley (1845–1930) of the Grand Fancy Ball hosted by Governor General Lord Dufferin and his wife Lady Dufferin in the Rideau Hall ballroom on February 23, 1876.

Composite image of the Dufferin Grand Fancy Ball at Rideau Hall on February 23, 1876. The final composite was completed in either May or June. (e008295343).

This composite was created by pasting hundreds of individual portraits taken in Topley’s studio onto a painted scene of the Rideau Hall ballroom, which was then re-photographed to create the final product. Topley learned how to create composite images from his former mentor and employer, William Notman (1826–1891), who owned a successful photography studio in Montreal. Topley, like Notman, was an astute businessman who took full advantage of these vice-regal events to turn a profit, as guests were eager to have their costumed characters preserved in the form of photographic portraits that they could share with family and friends, or paste into personal albums as memorable keepsakes.

Many individuals played up their character in the photography studio, assuming different poses and using a variety of props in their staged portraits. Mr. Campbell posed theatrically as a “Court Jester” when he visited Topley’s studio shortly after the Grand Fancy Ball hosted by the Dufferins had ended. William Campbell was the private secretary to Lord Dufferin and a well-liked staff member. 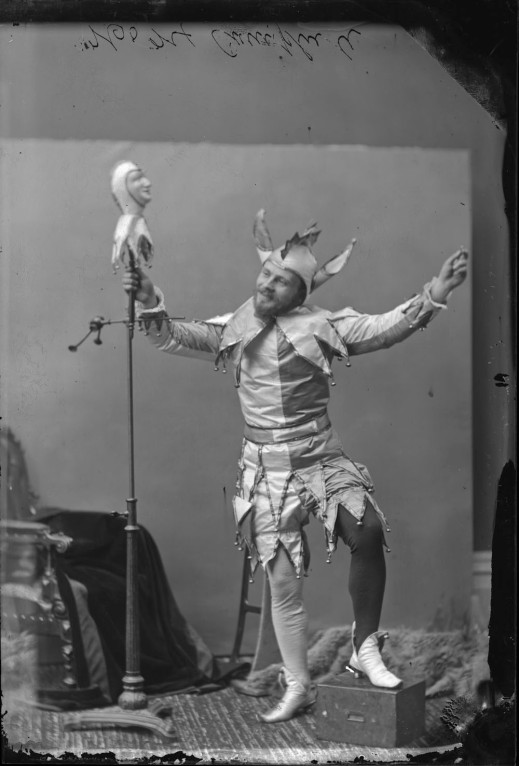 Miss Maggie Jones and Miss Zaidee Cockburn both dressed up as “Bonnie Fishwives of New Haven” at the Dufferins’ Grand Fancy Ball. They attracted some attention throughout the evening, which may have been linked to the lengths of their skirts, which were much shorter than acceptable Victorian dress.

Fancy dress skating carnivals were also very popular during this time, and, unlike the fancy dress balls, were far more accessible to the average Canadian citizen. In his studio, Topley recreated outdoor skating scenes for his sitters with a painted, snowy backdrop complete with artificial snow and a reflective surface to imitate ice. Women loved to wear peasant or pastoral dress to skating carnivals, as shorter skirts also allowed them to move around freely on skates. 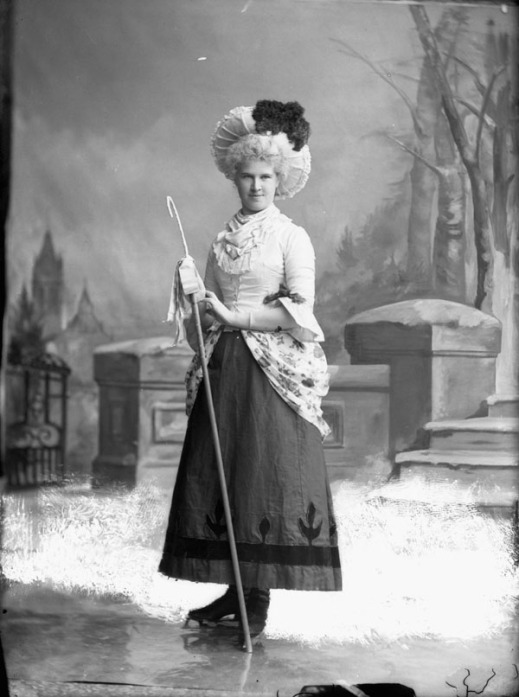 Allegorical characters were also well represented at the fancy dress balls and skating carnivals. Women dressed as “Night,” “A Hornet,” “The Alphabet,” or even as the “Dominion of Canada,” as represented by Mrs. Juschereau de St. Denis LeMoine at the Dufferins’ ball. 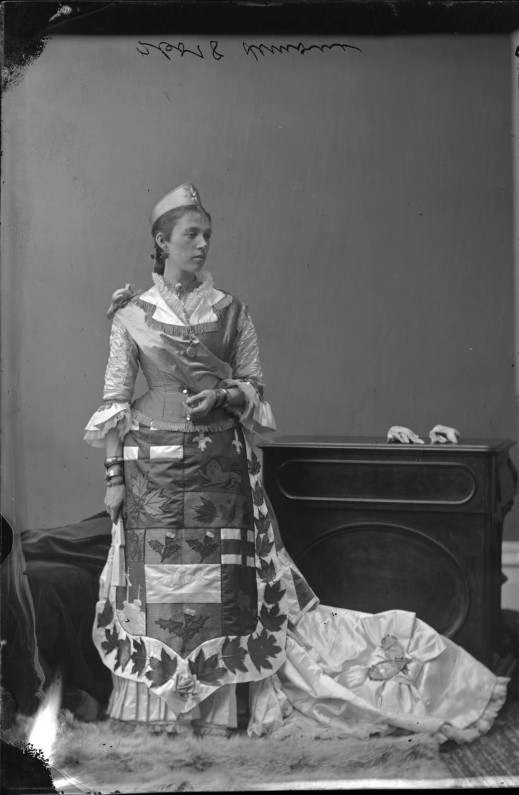 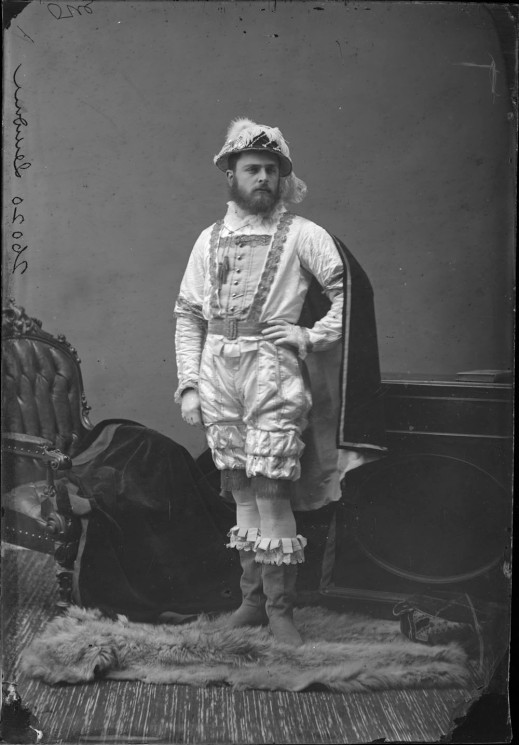 The Historical Fancy Dress Ball hosted by the Governor General, the Earl of Aberdeen, and his wife, Lady Aberdeen, in the Senate Chamber of the original Parliament buildings on February 17, 1896, was another widely reported event. This educational ball featured nine periods in Canadian history, from the Vikings to the Loyalists, enacted by two hundred and fifty individuals in a series of dances at the ball.

A photographic portrait of a group representing the voyages of the Norsemen at the Aberdeens’ ball illustrates how the medium of photography had evolved since the Dufferins’ ball twenty years earlier. Topley, who once again photographed the groups in his studio after the ball had ended, could now take an entire group together as a result of faster exposure times. The scene is also illuminated by natural light streaming in from the skylight seen at the top left of the image.

A historic group representing the voyages of the Norsemen to Northeastern North America photographed in Topley’s studio. They were the first historic group who performed a lively “polska” at the Historical Fancy Dress Ball hosted by Lord and Lady Aberdeen in February 1896. The young girl seated in the middle is Lady Marjorie Gordon, daughter of the vice-regal hosts, wearing a white and gold dress with her mother’s Celtic jewellery. (a137981).

A souvenir album was created and sold to guests afterward as well, illustrated with photographs of the historic groups taken by Topley (with the exception of one group) and text by historian and civil servant Dr. John George Bourinot, who provided advice and guidance to Lady Aberdeen in the months leading up to the event. Library and Archives Canada (LAC) has a copy of this souvenir album in its collection.

All of the above digitized images were reproduced from original glass plate negatives found in the Topley Studio fonds at LAC. These images, along with many others taken by Topley of guests who attended the Ottawa fancy dress balls and skating carnivals, are available online through LAC’s website.

Reproductions of these original glass plate negatives are on display at the National Gallery of Canada in the Canadian and Indigenous Galleries.

Emma Hamilton-Hobbs is a photo archivist in the Government Archives Division at Library and Archives Canada.

The William Topley collection at Library and Archives Canada is an invaluable resource for those interested in nineteenth-century Canadian photographic portraiture. Comprised of over 150,000 glass plate negatives as well as studio proofs and counter books, the Topley collection dates from 1868 to 1923, and illustrates the prolific career of Topley, a Montreal-area native, who began his solo career by opening a branch of the William Notman studio on Ottawa’s Wellington Street. While Topley did photograph subject matter other than people, portraits were his chosen specialty and the collection is a wonderful example of early Canadian studio work.

By the early 1870s Topley had purchased the studio he had been managing for William Notman, and was attracting upwards of 2,300 sitters per year. Topley’s prestigious downtown Ottawa location—he moved multiple times over the years, but always within walking distance to parliament—meant he attracted much of the city’s elite, including politicians and other important figures, who made their way to the photographer’s studio to have their portraits taken.

Children were often the subject of these portraits, posing alone or with siblings. In looking through these images we notice not only recognizable names, identifying some of these children as the offspring of the capital city’s movers and shakers, but something unchanged despite the time period. We see beyond the formality, the constricting clothing and stiff poses, and recognize that these portraits are not too different from those we might take today. We recognize children dressed up for a photo, attempting to sit still, looking either overly eager or slightly bored. 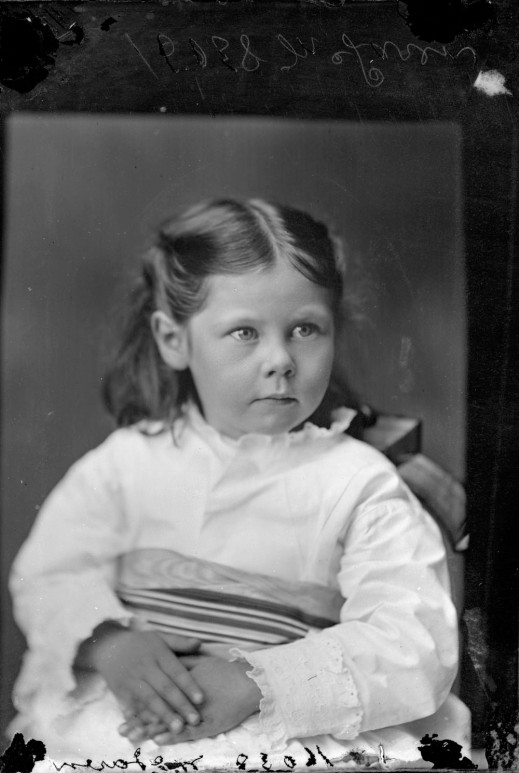 Studio photographers of this era often had clients pose with props, and Topley was no different. In his portraits of children we notice items like books, skipping ropes, dolls or pets clutched in the hands of the small sitters. Some children stand or sit up very straight with serious, concentrated expressions on their faces, while others lounge tiredly in chairs. In these ones especially, we can imagine how tedious the long exposures must have felt to a child, how many plates the photographer might have had to take to get a proper, non-blurry image.

Also interesting are the portraits of babies with hidden, or barely-in-the-frame mothers. It was quite common at the time for babies to sit on their mothers’ laps for a portrait, while a blanket or other fabric was thrown over the mother so that only the baby would be the focus. In several of Topley’s portraits of babies, we see a more subtle approach, with the mother encouraging the child from the edge of the frame. The photographer would later crop the mother out for the final print.

These wonderful portraits provide an alternative perspective on the face of Canada’s capital in the nineteenth century, and seem to offer a bridge from past to present, where some things never change. 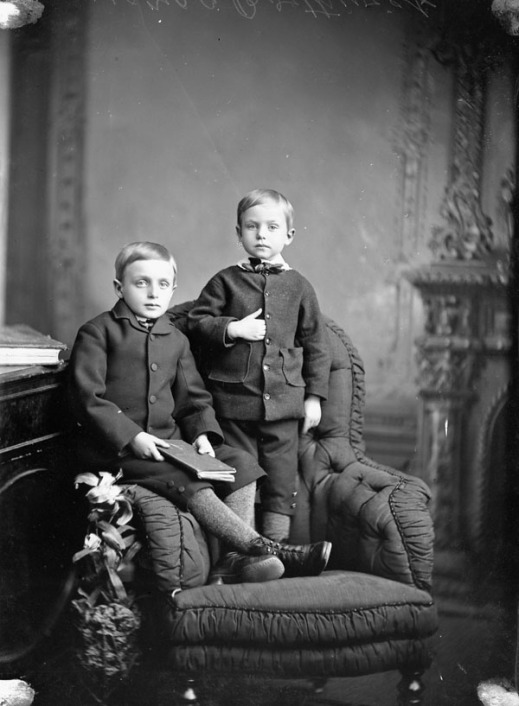 One of the most popular collections at Library and Archives Canada is the William James Topley photograph collection, acquired in 1936. The Topley collection is comprised of over 150,000 glass plate and nitrate negatives, in addition to 68 studio proof albums, daily assignment logs and account books.

Dating from 1868 to 1923, the large collection illustrates the prolific career of Topley, a Montréal-area native, who began his solo career by opening a branch of the William Notman studio on Ottawa’s Wellington Street. Having worked in Montréal for a number of years as an apprentice to the well-known photographer, William James Topley, would eventually drop the Notman name and run his own studio from a series of Ottawa addresses, moving from Wellington Street to the corner of Metcalfe and Queen, and finally to two separate addresses on Sparks Street.

The photographs produced during Topley’s lengthy career serve as a fascinating visual reference to life in Ottawa, as well as other Canadian cities and towns. His images include street scenes documenting daily life, commissioned photographs of store fronts, Parliament Hill before, during, and after the 1916 fire, and perhaps most compelling, his portraits of citizens, both famous and otherwise.

By 1872, the Topley studio was attracting more than 2,300 sitters a year, including prime ministers, governors general, members of Ottawa’s high society, businessmen, and average citizens. He created his famous composite image of the first major Canadian fancy dress ball, hosted by the Earl of Dufferin and his wife, in 1876.

Many of Topley’s clients were the families of Ottawa’s movers and shakers. Being the capital city, it was common for relatives of politicians, land owners and lumber barons to make their way to Topley’s studio at some point, to sit for a portrait. In the early nineteenth century, it was still a somewhat prestigious event to have your portrait taken, and wives, children, and even pets were photographed at the studio, some of them multiple times over the years.

In viewing these wonderful portraits, it is fascinating to see the clothing, hairstyles, and expressions of Ottawa’s earlier citizens, and interesting to see the faces of people for whom some of Ottawa’s streets, parks and schools are named. 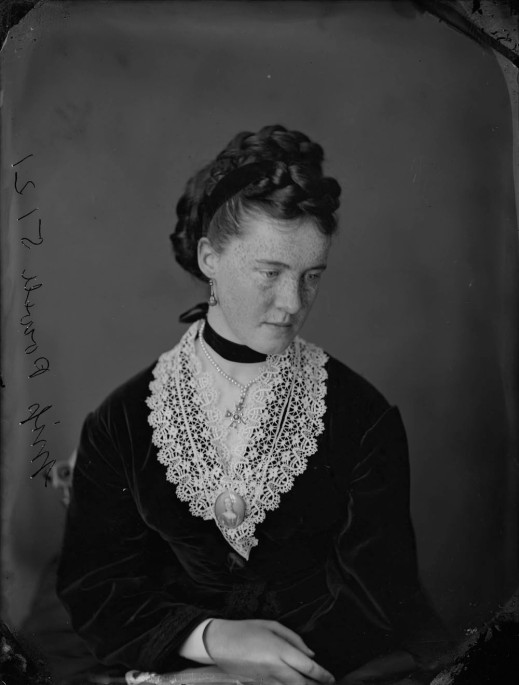 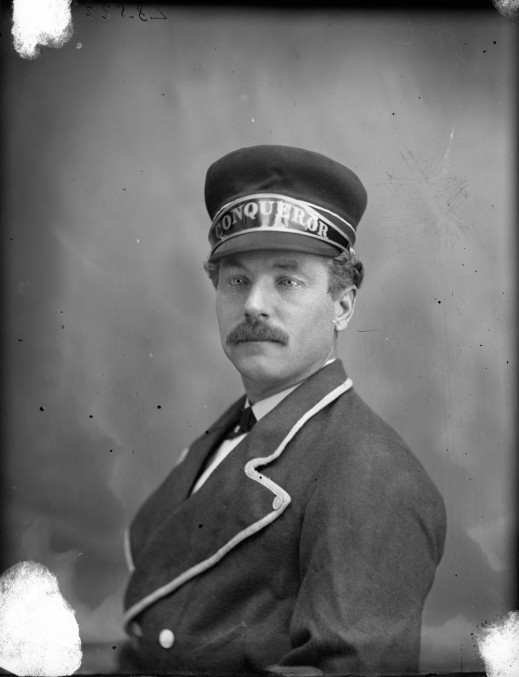