Our country’s vast expanses require frequent transportation from A to Z and points in between. Occasionally, civil or military aircraft, trains and ships are involved in accidents that range from minor occurrences to major wrecks that make the national news. LAC holds the archival fonds of the federal departments, agencies and boards that are tasked with investigating and reporting on transportation accidents.

If you’re interested in a marine accidents, use Collection Search and various combinations of keywords to narrow down potentially relevant records within the Department of Transport fonds (RG12). Type in RG12, the name of the boat, the location of the accident, and then filter your results by date.

You can also find published material on accidents. For aircraft accidents, check out Published Sources for Aviation Accident Reports. To find other published reports about transportation accidents, enter relevant keywords in Collection Search and select “library” from the dropdown menu.

Many researchers ask for information regarding specific military operations or units. It is helpful to have a date range to narrow the scope of the request. Start with a keyword search in Collection Search for records within the Department of National Defence fonds (RG24/R112) and choose “archives” from the dropdown menu to narrow your search.

For example, if you are interested in Operation Overlord, the codename for the Second World War Battle of Normandy (1944), you could try “RG24 operation overlord” and then filter results to archival material from the 1940s. Use the same steps if you’re interested in a specific military unit. Perform a keyword search for the unit’s name or number along with archival reference number “RG24.” 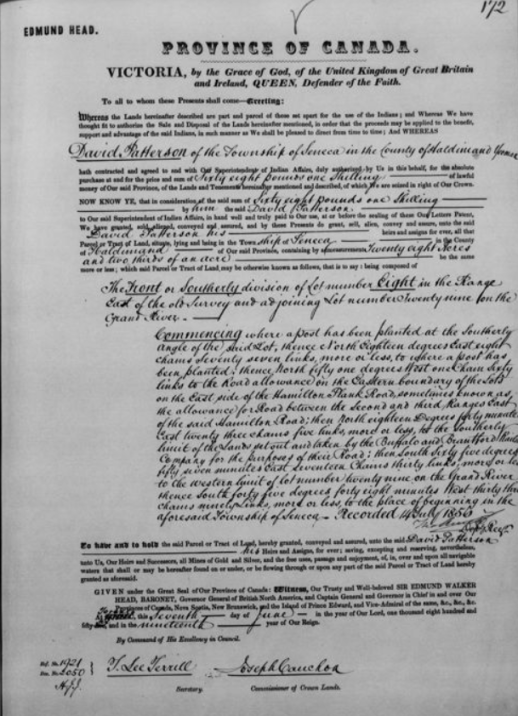 This is a very popular topic—especially interesting as our country’s land use has changed and evolved over time. Record keeping and shifting government responsibilities have made this type of research a challenge. There are several blog posts to guide researchers through the preliminary phases of their research:

Most researchers inquire about land they currently own or that was granted to their ancestors. The following information helps us respond to your request more efficiently:

Our reference services receive many requests related to attendance at residential or day schools. Most residential school records are in the Department of Indian Affairs and Northern Development fonds (RG10/R216).

In Collection Search, type in various combinations of the following terms for a broad search: the name of the school, archival reference number RG10, and keywords such as pupil, student, nominal, attendance, admission or discharge.

Refine your search results using the tabs across the top of the results page or the filters in the left menu. For example, you can limit your results to Archives (unpublished materials) and a specific date range. The goal is to identify and compile a list of complete references for potentially relevant files.

For links to digitized records organized by school, refer to School Files Series—1879–1953.

In Collection Search, start with the building type and location (e.g. Post Office Renfrew). Filter your results as needed—perhaps you are looking for photographs or contract specifications for a mid-century renovation. Filtering by date or type of document (e.g. maps) is often the best first step.

Use clues from the results page to conduct further keyword searches, perhaps using more specific terminology (like street names). Or widen your search using broader geographical terms (like the name of the province or region).

We love getting your questions and will always help you while following our Reference Services Charter. While we cannot do your research for you, Ask Us a Question and we will do our best to help you advance your research on any topic!

Rebecca Murray is an archivist in the Reference Services Division.

Less than 10 kilometres from Cranbrook, British Columbia, St. Eugene Indian Residential School was the smallest one in the province. Open from 1898 to 1970, the school was primarily run by the Roman Catholic Sisters of Charity of Providence and the Oblates of Mary Immaculate. Construction of the main building was completed in 1912.

As a project between the Canadian government and the Roman Catholic, Anglican, United and Presbyterian churches, the residential school system was in operation from 1892 to 1969. However, residential schools for Indigenous children predate Confederation, and the last one, run by the federal government, closed in 1996. Children from surrounding communities and reserves between the ages of 6 and 15 were coerced or taken away from their homes and forced to attend residential schools for 10 months each year, in many cases suffering physical, emotional, cultural and sexual abuse. By the late 1950s, St. Eugene was at its peak with 150 students, and even by its final year, it still had 56 students in residence. 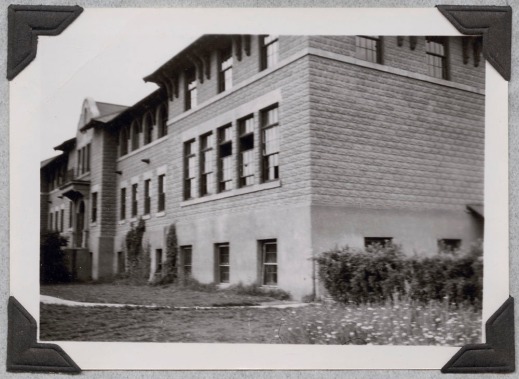 The painful impact of these institutions continues to cut through generations. In Rick Hiebert’s 2002 article in Report Newsmagazine, Chief Sophie Pierre, who attended St. Eugene from ages 6 to 16, says, “…there was this feeling to just blow it up. Knock it down. No one wanted to see it anymore.” But, Pierre continues, they were swayed by the powerful words of Elder Mary Paul. “She said it was within the St. Eugene Mission that the culture of the Kootenay Indians was taken away, and it should be within this building that it is returned.” 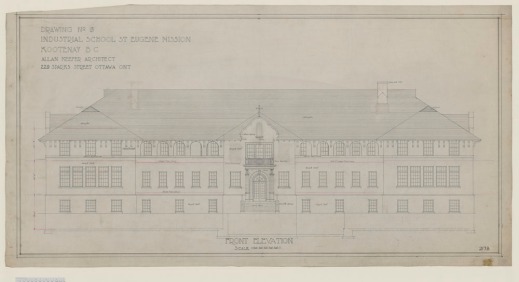 In 1996, the Ktunaxa Kinbasket Tribal Council submitted St. Eugene Residential School for designation as a site of national historic significance. According to Geoffrey Carr’s 2009 article in an academic journal, the application was rejected for a number of reasons: the site was going to be changed too radically, it did not satisfy the other criteria for the designations of schools, and finally, there was some wariness to commemorate a place that might be perceived as an embarrassment to the Canadian government. Instead, two years later, Coast Hotels & Resorts and the five bands of the Ktunaxa Kinbasket Tribal Council (St. Mary’s, Columbia Lake, Lower Kootenay, Tobacco Plains and Shuswap) announced that they would turn the historic site into a $30-million resort. The five bands would hold the lease to the property and control all the shares of the development corporation.

Chief Sophie Pierre, the major coordinator of the project, recalls her time at the school as terribly lonely. “Brothers and sisters were kept apart, not allowed to talk to each other,” she says in a 2003 Toronto Star article by Ian Cruickshank. Elder Mary Paul was a key inspiration for this project, saying,“…if you think you lost so much in this building, it’s not lost… You only really lose something if you refuse to pick it up again.” For the Tribal Council to maintain the building, studies showed that a resort would be the most profitable way to proceed. Although most funding came from federal government loans and grants, the Tribal Council made a particular effort to operate the business without governmental help.

The St. Eugene residential school is “…the only project in Canada where a First Nation has decided to transform the icon of an often sad period of its history into a powerful economic engine,” according to the resort’s website, “by restoring an old Indian Residential [S]chool into an international destination resort for future generations to enjoy.”

Critics argue that the redevelopment of St. Eugene has put economic gain before social memory. Carr writes that “…St. Eugene’s bears both the imprint of national contrition and the grotesque, enduring features of colonial violence.” Nevertheless, Chief Pierre takes great pride in how much this project will benefit the community in the long term.

In 2001, the resort’s golf course was named Golf Digest Magazine’s third-best golf course in Canada. According to statistics from Aboriginal Tourism BC, the main demographic group to visit such resorts are upper-middle-class baby boomers. By 2004, after some unfortunate financial struggles and a court order by the B.C. Supreme Court, the project was taken over by the Mnjikaning First Nations of Ontario, the Samson Cree First Nations of Alberta, and the Ktunaxa Kinbasket Tribal Council—effectively maintaining a complete First Nations operation, but with the Tribal Council no longer in its previous position of sole ownership.

Library and Archives Canada plays an important role in the collection and maintenance of information about residential schools across Canada. The records are integral for research regarding claims, architectural plans, and reports of administration and attendance. These records speak to the fact that the Indian residential school system was a deliberate choice by the Canadian government to take care of “the Indian problem,” as it was referred to in many government documents throughout this period.

Katrina Swift is a master’s student in the School of Indigenous and Canadian Studies at Carleton University who was doing a practicum in the Government Archives Division at Library and Archives Canada.

Library and Archives Canada (LAC) is presenting a series of galleries consisting of photographs of residential schools, federal day schools and other similar institutions attended by First Nation, Inuit and Métis children in Canada from the late 19th century to the 1990s.

Organized by province and territory, the images featured in these galleries derive from many collections held at LAC—both government and private—and represent a selection of our holdings. The majority of the photographs were taken by federal government employees who worked for the former Department of Indian Affairs and Northern Development. You can find photos of residential and federal day schools in Accession 1973-357, RG85 and RG10. Use Archives Search—Advanced to search for additional images not included in the galleries.

Photographs of the students, staff and schools are also found in a number of private collections—Henry Joseph Woodside, Joseph Vincent Jacobson, Kryn Taconis and Charles Gimpel—to name a few. 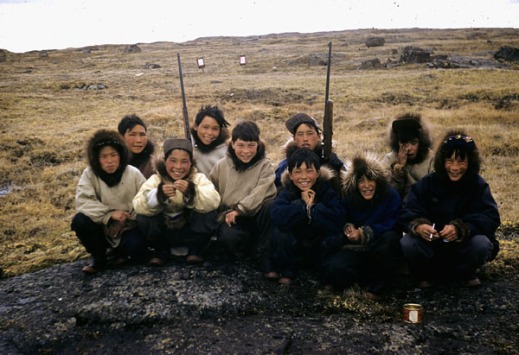 You can access additional photographs of Indigenous students and schools using Collection Search. For tips on searching the database, see the Online and non-digitized photographs section in Residential School Records Resources under What is found at Library and Archives Canada.

Library and Archives Canada (LAC) holds records created by the federal government about the administration of residential schools.

The School Files Series (archival reference RG10-B-3-d) within the Indian and Inuit Affairs sous fonds contains records created from 1879 to 1953 about residential schools and day schools.

This series contains some records of the admission and discharge of students at residential schools, as well as files on the establishment of individual schools.

The School Files Series has been digitized and is available through the Microform Digitization section of the LAC website.

Our reference specialists recommend a list of which schools are mentioned in which volumes and reels of the series. This list can be found in the Search Help section of the digital version of the series. It will prove to be quite useful when navigating the School Files Series.

Questions or comments? We would love to hear from you.