Plan of Canada or the province of Quebec from the uppermost settlements to the island of Coudre […], 1761–1763 (item 5446324). The map was assembled with all the necessary precautions on the floor of the Library and Archives Canada (LAC) Preservation Centre, in Gatineau. The assembled map is about 8.8 m by 15.5 m in size. James Cook’s large map of the St. Lawrence (e010691696) is displayed on a table, seen here in the upper-left corner. Photo: David Knox, LAC

In September 1760, the British army took Montréal, but there was still no guarantee that it would hold on to the heart of New France and Canada (the present St. Lawrence Valley). It had little knowledge of the territory it occupied or of the river and land lines of communication with New England. This lack of knowledge weakened its hold on these areas. To make up for this, General James Murray, Governor of Quebec, undertook to have the St. Lawrence Valley mapped in detail. The occupation provided an advantage: many military engineers were already present in the territory, including the talented John Montresor and Samuel Holland. Holland settled in the city of Québec and had a significant impact on the history of cartography in Canada. The maps and information compiled during this major project were ultimately sent to King George III of England and senior officers to improve their knowledge of the territory and its inhabitants. These documents would become essential tools in the event of a handover to France, which could require a new invasion attempt.

Thus, in spring 1761—260 years ago—teams surveyed the entire area from Les Cèdres to Île aux Coudres. During their journey, they included every element of physical and human geography: relief; cultivated, wooded and swampy land; rivers; roads; village cores, including houses, churches, and mills; and many other sightings. They also included the First Nations communities of Kahnawake, Kanesatake, Wendake, Odanak and Wôlinak. Fortifications and British troop positions were also represented. General Murray also demanded that, for each village, the number of families and the number of men able to bear arms be counted and that these data be included on the map. It should be noted that the location of the logbooks belonging to the surveyors who took part in this extensive cartography project remains unknown. 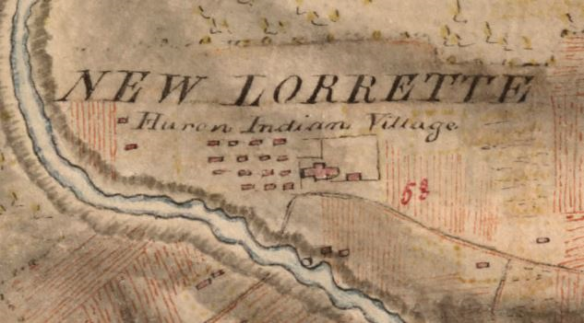 Seven immense hand-drawn maps of the St. Lawrence Valley (commonly referred to as the “Murray Maps”) were drawn as part of this project, each including numerous sheets. Three draftsmen, Charles Blaskowitz, Digby Hamilton and Charles McDonnell, drew the final, watercolour-enhanced versions so that they could appeal to their prestigious recipients. Two of these maps are part of LAC’s collection: the map belonging to the Board of Ordnance (item 5506021), which was tasked with supplying the army and military engineers, and the map belonging to James Murray (item 5446324). Two maps are in the British Library in London: the map belonging to William Pitt, Minister of War and future Prime Minister of Great Britain, and the map belonging to King George III. Another map, which may have been intended for Governor of Montréal Thomas Gage, is kept at the William L. Clements Library of the University of Michigan in Ann Arbor. The other two maps, including Commander-in-Chief Jeffery Amherst’s, are missing. Perhaps they will re-emerge one day? Since the Murray Maps reported military intelligence for that time, they were never engraved for publication. The extent of the territory represented, the form followed, and the style of drawing differ somewhat from one map to another. Thus, the Board of Ordnance map, the design of which is more artistic, covers a slightly smaller area, from Les Cèdres to Cap Tourmente. It consists of 23 sheets of varying dimensions divided into four sections. The map intended for James Murray includes 44 sheets of roughly the same size and extends to Île aux Coudres.

No similarly detailed map of this immense territory, on this large scale, had been drawn under the French Regime. Even still, cartographic production had been very prolific: think of the maps of Jean-Baptiste-Louis Franquelin, Gédéon de Catalogne and Jean-Baptiste de Couagne, or even the maps created by Jacques-Nicolas Bellin (e.g., item 3693313) at the Dépôt des cartes et plans de la Marine, in Paris, using information from the colony. The Murray Maps are therefore a unique representation of the St. Lawrence Valley on the eve of the official transfer of New France to England through the Treaty of Paris of 1763. They constitute one of the most significant cartographic projects undertaken by the British army during the 18th century, along with projects carried out in Scotland (Roy, 1747–1755), Florida (De Brahm, 1765–1771), Bengal (Rennell, 1765–1777) and Ireland (Vallancey, 1778–1790).

This Flickr album contains the 44 sheets of James Murray’s personal copy, which was restored and then re-digitized. The finding aid includes the index map on which the electronic copy numbers for each sheet have been added and a comprehensive list that makes it easier to search for and identify places (note that today’s toponyms are used). You can easily locate the sheets that interest you and download images using LAC’s Collection Search tool.

A large part of the built heritage that appears on the Murray Map has disappeared, the landscape has undergone major transformations, and the representation of many features is not perfect. Nevertheless, you may be able to find the house of your ancestors, your neighbourhood, the church or mill that you visited on vacation, or even the roads that you have travelled over the years. Comparing the Murray Map with current images, like those found in Google Maps, is also very interesting. You can also use Co-Lab, LAC’s crowdsourcing tool, to help further document this cartographic treasure. The possibilities are many. Explore as you wish!

Enjoy your trip to the 18th century…through the eyes and pens of British military engineers.

This blog was written by Isabelle Charron, early cartography archivist in the Specialized Media Section of the Private Archives Division at Library and Archives Canada.

The year 2020 marks an important year in the history of Canada. One hundred and fifty years have gone by since the 1870 transfer of Rupert’s Land and the North-Western Territory to Canada. It is also the year that Manitoba entered Confederation. This was no small feat. There were discussions as to whether the Canadian government would create a province or just keep it as a vast territory.

The Métis would push Canada toward creating the new province.

Manitoba would be the first addition to the list of four original Canadian provinces: Ontario, Quebec, New Brunswick and Nova Scotia. There was no template to use. Deep, careful and altruistic thinking about the future should have been the order of the day. Instead, for the Métis, what resulted from the experience were feelings of displacement, trauma and resilience. In post-Confederation Manitoba, the position of the Métis deteriorated. New settlers from Ontario were hostile. Métis elders, over generations, described that period as a “Reign of Terror” against the Métis.

Métis Nation Elder Verna DeMontigny recently described the province-building exercise that led to Manitoba as a hard birth, or Kwaata-nihtaawakihk in the Michif language. It was certainly difficult.

The Supreme Court of Canada, in its 2013 decision in Manitoba Metis Federation Inc. v. Canada, provides a detailed narrative of the Métis people, the Red River Settlement, and the conflict that gave rise to the Manitoba Act and Manitoba’s entry into Canada:

The story begins with the Aboriginal peoples who inhabited what is now the province of Manitoba—the Cree and other less populous nations. In the late 17th century, European adventurers and explorers passed through. The lands were claimed nominally by England, which granted the Hudson’s Bay Company […] control over a vast territory called Rupert’s Land, which included modern Manitoba. Aboriginal peoples continued to occupy the territory. In addition to the original First Nations, a new Aboriginal group, the Métis, arose—people descended from early unions between European adventurers and traders, and Aboriginal women. In the early days, the descendants of English-speaking parents were referred to as half-breeds, while those with French roots were called Métis.

On November 19, 1869, the Hudson’s Bay Company surrendered Rupert’s Land and the North-Western Territory under its letters patent to the British Crown. By Order-in-Council dated June 23, 1870, the British government admitted these territories to Canada, under section 146 of the British North America Act, 1867 (now the Constitution Act, 1867), effective July 15, 1870.

The Canadian government, led by Prime Minister John A. Macdonald, intended to absorb the territories and open them up to settlement. Before this could happen, Canada would need to deal with the Indigenous peoples who were living in these territories. Under the Royal Proclamation of 1763, Canada was duty-bound to treat with the sovereign Indigenous nations to obtain their consent to the Imperial Crown to exercise its sovereignty over them. Written more than a hundred years before, the proclamation’s purpose was to organize and manage the newly expanded British North American territories after the Seven Years’ War. Included in the proclamation were regulations to stabilize relations with Indigenous peoples through the regulation of trade, settlement and land purchases on the frontier.

The Manitoba Indian Treaty; a chief lecturing at length at the Stone Fort (the Métis man seated on a chair within the circle may be the translator) (e010967476)

Therefore, for the First Nations, the process would be to enter into treaties, whereby they agreed to settlement of their lands in exchange for reservations of land and other promises. The government policy with respect to the Métis was less clear.

Prior to confederation with Canada, white settlers had begun pouring into the Red River, displacing the social and political control of the Métis. This led to resistance and conflict. To settle the conflict and assure annexation of the territory, the Canadian government entered into negotiations with representatives of the Métis-led provisional government. The result was the adoption in 1870 of the Manitoba Act, which made Manitoba a province of Canada.

The Manitoba Act is a constitutional document with many treaty-like characteristics. It enshrines the promises and obligations that Canada has to the Métis people. These promises represent the terms under which the Métis agreed to surrender their claims to govern themselves and their territory, and to become part of Canada. These obligations remain in force today.

The Métis Nation is an internationally recognized Indigenous people. In Canada, it is one of three Indigenous groups with constitutionally entrenched Aboriginal and treaty rights, alongside First Nations (“Indians”) and Inuit (“Eskimos”). The Métis Nation Homeland is a vast area of land in west-central North America. The Métis, as the Founders of Manitoba in 1870 and Canada’s negotiating partners in Confederation, continue to play an important role in Canada’s development.

William Benoit is the Advisor for Internal Indigenous Engagement in the Office of the Deputy Librarian and Archivist of Canada at Library and Archives Canada.